Posted on January 28, 2013 by Jeff Schreifels and Richard Perry 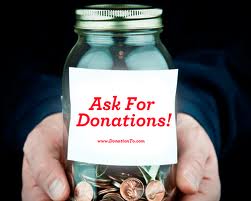 If you are afraid to ask someone for money you should not be involved in major gift fundraising.  That sounds pretty logical, right?  Yet, when Richard and I get involved in helping non-profits with their major gift programs, we find so many MGOs who don’t ask their donors for gifts.

Now, after so many years of this happening you would think we’d be used to this, but we are dumbfounded every time we encounter it.

But I want to be clear.  I don’t blame the major gift officer.  It’s a leadership problem. Here is what it looks like:

Usually the board and/or president of the organization, or even the development director (no, I’m not kidding – I once had an encounter with a development director who had been in the business for over 25 years and proudly proclaimed she had never asked for a gift!) sees fundraising as a necessary evil.  They know it has to be done, but they don’t like it so they unconsciously sabotage it.

This means the leader doesn’t get out to meet donors, fundraising appeal letters are weak and the non-profit usually has a big “communications” budget with a ton of “friend-raising” events.

How this plays out in the major gift program is that MGOs are essentially called “relationship managers.”  They go on visits to say “hi”, they bring little gifts to donors, they are on the phone “checking in” with their donors and sending little notes.  Then, it seems they spend the other half of their time getting involved in office politics or things that have nothing to do with major gift fundraising.

Yes, gifts do come in.  But, they usually are not large, organizational changing, new project starting gifts.  They are in the $5,000-$10,000 range and everyone seems happy.

Until this “strategy” stops working.

Now, you might be saying to yourself, “Jeff, you’re making this up.  This doesn’t happen.  Why would you not ask donors to give?”

Unfortunately, Richard and I see this type of scenario with major gift programs all over the country.  It’s sad, really, because non-profit leaders have not embraced fundraising as a good and necessary function both for their own organization and for donors.

Yes, you heard me right.  It is necessary and good for people to give.  If a non-profit leader does not understand how important it is to help people discover joy in their giving they will unknowingly create a culture of shame and fear associated with fundraising.

If the development director easily succumbs to that shame and fear, you end up with a major gift program like the one I just described.  And this happens over and over again in non-profits all across our world.

Even if the development director “gets it” and tries to promote a real culture of philanthropy in his or her own shop, and the leader of that organization is not on board, it creates a toxic fundraising environment.  Elaborate “work-arounds” start to develop to overcome the leader’s distaste for fundraising and it just becomes a huge mess.

This takes me back to our MGOs.  It’s easy to blame an MGO for not asking donors.  But, when Richard and I run into this situation, we know first to examine the leadership of the organization and have compassion for the lack of productivity of the MGO.

Often, even though MGOs have been brought up in this toxic mix of fear and shame around fundraising, with the proper training and a new found sense of what fundraising really is all about, they begin to thrive.  We have seen some remarkable turnarounds.

Unfortunately, many MGOs who have been brought up in to this “relationship manager” “let’s not ask” culture, cannot get past it and they ultimately have to leave.  It’s not their fault. I blame the non-profit leaders and teachers who don’t understand the amazing role philanthropy can play in the lives of donors, which ultimately can change the world.

Is any of this happening in your organization?  Do you feel like you have to constantly “work around” your CEO or President?  Is your major gift program floundering because you’ve never really asked your donors to invest in the mission, but simply accepted their gifts?

Things can change.  I’ve seen it happen.  It takes courage and strength to build a culture where donors are truly honored by asking them to make significant investments in your organization.  But this is exactly what donors want to do.  Take the lead in your organization to grasp the philosophy that your organization is the bridge between your donors greatest desires and passions and the world’s greatest needs.

Be bold, ask, and ask again.

About Jeff Schreifels and Richard Perry

Jeff Schreifels and Richard Perry have over 55 years of experience fundraising for non-profits. Richard Perry was co-owner of Domain Group until 2005. Jeff Schreifels was a Senior Strategist for Domain Group for 12 years. They came together a few years ago to start Veritus Group, a full-service major gift fundraising agency. Veritus Group has a unique, data-driven approach unlike any agency focused on major gifts. Jeff and Richard are passionate about their work, passionate about life and hopes this blog will provide you with insights and tangible benefits for you and your work. Thank you for reading!
View all posts by Jeff Schreifels and Richard Perry →
This entry was posted in Development Directors, Major Gift Officers, Major Gifts, Non-Profits, Philanthopy and tagged Asking, Development Directors, Director of Major Gifts, Fundraising, Giving, Joy, Non-Profits, Philanthropy. Bookmark the permalink.